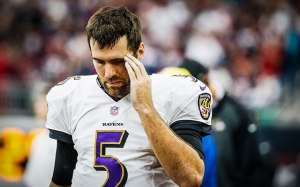 When Joe Flacco was drafted in 2008, in the 1st rd at the number 18 overall by the Baltimore Ravens, Ravens fans were surprised and unsure as to what their plans were with the super sized QB. Kyle Boller was their starting QB at the time, and his game was nothing to be blown away by – so jubilant hope was in the backs of their excited minds, but they were also, naturally hesitant in their thoughts for what this relative unknown was going to bring.
Joe signed a 6 year, $125 million contract, including $44 million in guaranteed money, back in March 2016. What should the Ravens have done with the 32 year old QB from Delaware? Make no mistake about it, Flacco has been a vital piece for the Ravens organization for many seasons, but with only 26 wins over the last 3 healthy seasons – it can raise some very legitimate questions of his leadership on the field – to come through when the chips are down, and the big play is needed.
Flacco did have his magical postseason in 2012 – where he won his Super Bowl ring, with 11 TD passes, 0 ints, and putting up 276 YPG in a fantastic playoff run. So how could the team ever think of moving on from him be a consideration?
We will go over that.
When Baltimore won the championship that year, they also had Ray Lewis driven with his swan song emotional energy, which was a huge plus for the Ravens. Keep in mind, they also had problems again with Joe’s accuracy, at just 58% during that stretch, as well, including 2 of their 4 post season games completing under 53%. Since that huge memorable moment – he got his big paycheck – but what has been going on since then? A whole bunch of mediocre – that’s what.
As far as being big armed QB, Flacco has that to spare, but his overall production has been seriously lacking. He has only hit 25+ TD passes in a season twice in his 9 year career. Consider Kirk Cousins has already 2 seasons with 25+ in just 5 seasons of playing time, Andy Dalton and Russell Wilson have both eclipsed those numbers – and they have played less than Flacco has.
It may be crazy to think about, with him coming off a career high 4317 passing yds in 2016, as he also attempted an NFL 2nd ranked, 672 passes in a pitiful run offense in 2016, with no RB getting over 48 rushing YDs/game. So when a team is putting up 42 attempts/game – any starting QB worth his paycheck is bound to put up some hefty passing yard numbers in the air. He sported a miserable YPA – putting him 4th with a 6.42 YPA out of the 6 QBs who attempted 600+ passing attempts. Better than only the dumpster fire that is Blake Bortles, and Carson Wentz, who was a rookie out of that group. And his TD passing struggled terribly, at just a measly 2.9% TD passing ratio.
He has carried a pretty solid completion rate with 5 years at a 62% completion rate and a career 61.5% completion passer. But only 4 seasons of a borderline 7.0 YPA or better – which makes one second question just how much does Joe do pushing it downfield? Truthfully, in the Ravens wins – he has shown repeatedly, he is the reason – when he is moving the ball downfield. He has shown he can sling it when he has the chance, with his big right arm.
But, the uglier side is he has also thrown 61 ints over the last 4 seasons. About 15 picks/season – with an avg TD turnaround of 20 /season in that same timespan. Which would make any GM shake their head and think what could they still get for the 6-6 veteran. Flacco has sported a QBR rating in the 50’s or lower for the majority of his career – based on his poor mobility and terrible blind spots, when DEs are coming in, as he has shown. Especially in the last several seasons, since winning the big game. So basically what you are getting with Flacco is 20 TDs, 13 Ints, 3600 YDs and a 60% completion passer.
Is that really that great? Flacco has been putting up more bad numbers this season, with a bottom feeding 151 YPC and 6 picks – which is going to be a large reason why the Ravens are nothing more than a blip to opponents in the NFL.
The real question, then arises, what could Baltimore be able to replace him with? That’s where the real questions arise.
Ryan Mallett? The 6-6 QB has had 6 years to show any team why he should be a starter, and hasn’t. He has ran though his bottom dwelling career with 3 different teams – carrying some very sad career passing numbers. Mallett, obviously, has some semblance of QB skills – but they haven’t transitioned well into the pros. And his defensive reads, and accuracy have lacked terribly vs the top ended CBs that he sees in the NFL game. So is it a sense of “we have nothing better to try” or is it more “we paid him this amount of money, we have to make this work?”
What about the next draft in 2018? Potential QBs they could maybe target, depending on their position. The versatile Lamar Jackson, or if making the right moves – Sam Darnold from USC, maybe? Try and swing a trade somewhere if possible? Do they still really think Flacco is the man to lead this team for the next 5-6 years for them?
Truth be told, Flacco is the primary reason the Ravens are ever in the majority of their games. But their management might need to consider a new direction, especially at the amount of cash they are paying him. He may have given them a semi-fluke Super Bowl run, and a steady serviceable QB at the helm. But maybe it is time to at least consider other options with far better production to get their team the big wins.
Written by Mike Anthony from 10StarPicks.