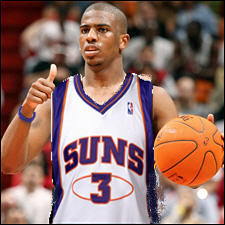 Chris Paul going to the Phoenix Suns just might be the biggest reason to get excited if you’re a Suns or a Chris Paul fan. We all know that CP3 is wearing another new jersey in Phoenix now. Paul moved from Oklahoma City to a promising young team in a veteran role with nothing to lose on his shoulders. The Phoenix Suns have been a poor team since the early 2000s, they haven’t been the same since Mike D’Antoni was running the 7 seconds or less game-plan. Their best season in the last decade was in 2013 with 48 wins.

The 35 year old vet has still been playing about as well as anyone in the PG position with his shooting and passing ability. He brought 18ppg on 48% shooting to OKC. I dont think a lot is expected early on – so his chemistry and skillset with the Suns will have some time to acclimate. I do feel, after 20-30 games in, the team could be looking even better than they have been.

Paul is a small guy who still gets to the rim with a soft touch, but, he can also spot up and bury the 3pt shot, as well, as is shown with his 37% shooting from deep for his career. His experience and ball handling should allow their young players to flourish. Devon Booker and Mikal Bridges are just 24 years old – adding 35 year old Chris as their veteran on the court should be quite a change in mentality. Phoenix Suns fans realize that the Suns have some young talented players on the court. Booker hung 27ppg last season while also shooting 48% from the field, and 22 year old Deandre Ayton averaged 18 /game, and pulled down nearly 12 rebounds per game, while keeping a tight check on opponents. Booker on the wing, will give Paul more playmaking opportunities against defenses.

The Phoenix Suns have the very real potential to become a threat this year – he brings a level of respect to Phoenix. The 175 lb ball handler now gives Phoenix the chance to compete for the long haul. Phoenix has a really sturdy foundation as a unit, and could have a postseason in their eyesight in the near future. The Suns could have a tough team to handle – they just have to make sure they keep the core pieces together. Devon Booker, Deandre Ayton  and Mikal Bridges are young NBA Stars which has a rock solid beginning to something that could develop into something very tough to deal with.

The Suns should enjoy the spoils of getting CP3 – we all know that Booker will be leading this team 2-3 years from now, but Chris Paul right now is perfect for that veteran they need.
Paul has landed himself in a great situation.