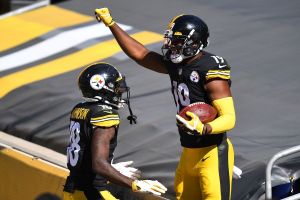 Some felt Eric Ebron had one lucky year in 2018. In 2019, he looked to have given up on the Colts, dropping almost 10% of his passes. I feel their franchise QB leaving right before the season started, absolutely brought the team morale down overall, and let’s be completely honest, there is a huge drop off from Andrew Luck to Jacoby Brisett throwing him the ball. Ebron probably wouldn’t have had so many naysayers, if so many didn’t hype him up so much back in 2014, when he was coming into the draft. He has shown to be a very good redzone target. When he is determined and motivated – he is a beast, in 2018 he caught 66 passes, and 13 TDs, when Andrew Luck was throwing passes to him, and the Indianapolis Colts were fighting for the AFC South division. Andrew was far more consistent as a QB, and helped the 6-4 TE grow when he played there in Indianapolis – with TY Hilton taking the top off deep, and Marlon Mack keeping the LBs close.
The man Pittsburgh misses the most, in my opinion, was 6-5 Heath Miller, he was Ben’s security blanket, and was a durable chains mover. In 106 games, he had 6 seasons of 70 or more targets from 2009 to 2015. Now, the 255lb former Colt will be a huge target; he has the perfect height at 6-4, and will play his role , and Roethlisberger will use him well. Ebron has never had a guy like Vance McDonald to play alongside of, and that will help him even more. Ever since Heath, there hasn’t been a steady TE for the Steelers, Vance McDonald has been adequate at best, and anyone else in that position, has been nonexistent. Pittsburgh can go into a 2 TE formation and then let Ben take over – and make the best decision for the team.
The Steelers can run 2 tight end sets – and get back to their bread and butter style that will then help the Steelers run game.
Vance can stretch the field – as both TEs are their most effective in the red zone. McDonald has been their TE1 –  but Ebron is an upgrade, as a pass catching TE. Ben has always loved his TE’s in the red zone – if he can put together a similar season that he had in 2018 – he will be a daunting problem for opponents again this year. He is a huge red zone threat – which is something that they just didn’t have last year in their passing game. The Steelers have always been their best when they are running the ball efficiently, as long as everyone can stay healthy in the team this year they can be a real concern.
Ebron going to a veteran QB like Ben is going to make him even better. Luck used his large frame in the end zone as a bullseye – and he put up a great TD ratio with 13 TDs on 66 catches, a massive 20TD%.
Eric Ebron is going to be Big Ben’s new best friend and will catch at around 8-10 TDs this season and will be a solid Redzone threat for Big Ben and the Pittsburgh Steelers.