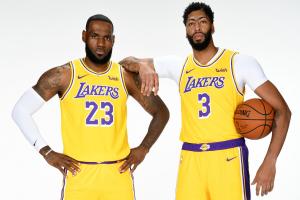 Nikola Jokic is a stud no doubt, he is the daunting core of the Nuggets offense and has been for over 3 years now, his points, boards, and assists /game lead the team.
And yes, he is a center.
Jokic is a complete beast – a throwback kind of player who doesn’t look to be “in the zone” during the game, but seems to always give you an astonishing “ooh or aah” moment. Even when “The Joker” plays against the tougher D in the NBA – he does well, still putting up steady numbers and making plays when needed.

Jamal Murray works hard, and has been improving over the last several seasons. Murray seems to have a chip on his shoulder – almost as if every game he has something to prove. He has improved his scoring by +2.1ppg and his play-making ability by +1.5apg since his 3rd season.
I love his midrange game, of quick jump shots and pull ups.

Paul George is a really great player, and has been for many seasons, he has averaged 21 or more, and has hit 38% or better from deep in 6 seasons. And now , despite being on a “Kawhi Leonard” heavy team, he is still putting up 21 and knocking down 41% from behind the arc every game. George can definitely carry a team, and he is a guy who can slow down a team that goes on a  run, with a quick bucket or making a big defensive play, as well.

26 point scorer, 7 /game rebounds, Kawhi Leonard was very good for the Raptors in 2018 – but the impact that Leonard has had since arriving in LA is beyond awesome. Leonard led Toronto to the title in 2018, and then went to LA – and here they are, playing top notch ball, and a good bet to win it all. His skill and formidable leadership ability is almost weird, in a twilight zone-like and creepy way.
LA was very slick to be able to grab Paul George and Kawhi Leonard, it has changed the landscape in the West. They now have 2 guys who can easily take over and lead the team, if either is having an off night.
LA Lakers
LeBron James / Anthony Davis
LeBron James ; 28ppg / 49FG% / 8rpg / 10apg
Anthony Davis; 26ppg / 50FG% / 9rpg / 3apg
LeBron James is the reason the Lakers have come back from the cellar of the West. They were a stinking 35-47 in 2017, they were just as nauseating in 2018, at 37-45 – and everyone was laughing and ridiculing James. Well, the mocking laughter hasn’t held up really well, has it?
Against the mighty Bucks, late in the season – the 17 year vet showed his prowess as he recorded 37 pts, 8 assists, and 3 steals in a 113-103 win.
He is still just something to watch as they push to the NBA Finals.
Whether you like him or not, he is really good at basketball. I love LeBron’s “I don’t care” attitude, he always shows up for the game, and plays tenacious. James plays with a skill that most, just don’t have. If the ball isn’t dropping for him, he makes up for it, by stopping players on D. And then he goes into PG mode – which in turn, stops the LA game from going into pure chaos.

Anthony Davis joined the Lakers, and was the perfect addition, that kept the team in the playoff hunt all season long, with great scoring and excellent defensive play.  Having a couple great players added doesn’t always add up consistently for teams, this has. Davis has been dominant in the scoring game at times, registering 21 games of 30 or more, and is an icy threat on the defensive end racking up 21 games of 3+ blocks.
“The Brow” is always ready – he is smooth and has been the perfect fit for LA.