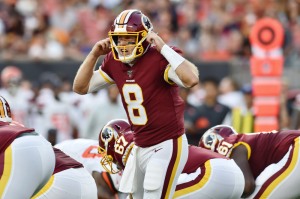 Many folks have fallen under the Murray spell that he is the next big thing as a QB. I 100% disagree. Dwayne Haskins is where it is at. Dwayne Haskins should have been the first QB taken in the draft, without question. Haskins needed to happen for Washington, and their organization. The Skins passed on Russell Wilson in the 2012 NFL Draft, and grabbed RG3 instead – and here we are, 7 years later, after yet another sub .500 disappointing season, they looked to have made the right choice this last draft.
I don’t think there’s any 4k passing QB in the 2019 draft that’s gonna light the league up on arrival. Daniel Jones is interesting, but I question his deep ball, Drew Lock comes in with just a 56% passing pct in college, and Kyler Murray really will be a novelty, at best. Finishing 3rd in the Heisman Trophy voting behind the tiny Kyler Murray, and 43 TD thrower, Alabama’s Tua Tagovailoa. But, I am feeling that 6-4 Haskins is going to have the best career of the bunch. Dwayne Haskins will be an upper-mid level starter for years, he is comparable to a Kirk Cousins or Steve McNair mold type QB, in my opinion. A guy who can produce strong numbers on a yearly basis.
Even though, typically Ohio State QBs have not faired well in the pros, with Troy Smith from 07 and Cardale Jones being the most recent throwers to join the NFL ranks, and they certainly haven’t been anything worth a blurb. The only big hitch on Haskins, it’s that he only started for 1 season for the Buckeyes – so he only has a small resume of 14 games of game experience. Which, is not always great. But, it isn’t always bad, either.
His arm is strong and accurate, and is able to sling the ball where it needs to go. His 70% passing was ridiculous, and he also carried a 9.1 YDs / attempt, he isn’t afraid to move the ball on the field, he isn’t living on short passes and bubble screens. Throwing with tight zip he is always sure where the ball is being sent. He put plenty of big games together during the 2018 season with 9 games of 300 or more, 10 games with a 3TDs or better, and hitting 67% or better of his passes 9 times in 2018. He has the complete look to be a successful QB. He is a genuine pocket passer, with a deadly arm that can make all of the throws. His lethal accuracy is a great thing to have – but it isn’t what makes Haskins the best here, still, it is where his passes go – that is what impresses me, and reveals the heart he has. Haskins will be wearing the burgundy and gold uniform this year, and brings talent and heart to a team that is waiting their next leader behind center.
This QB crew weren’t the showstoppers of this draft class, but Haskins is going to be the best of the group. In 2018, he led the NCAA in passing yards with 4,831, and passing TDs, with 50. I feel once on the field – he can do as good a job as Mayfield did,  and will likely land the QB1 spot by week 5.
I feel he is going to be a very good QB for years to come.