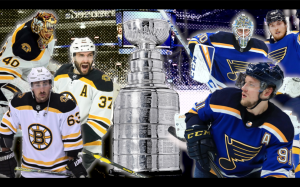 The St. Louis Blues have churned butter all-season. This team is a group of guys working in the factory, punching the clock, sweating it out and getting the job done, night after night, day after day. This team deserves to be right where they are because they went out and fought for it. They stood on their head when it was necessary, and they played defense when they had to, they played offense when necessary and they did all of the little things that it takes to make a winning hockey team. The sports betting sites have clearly drawn a line in the sand by placing the Bruins as a clear-cut favorite, but is it legit?

St. Louis can win this series, but they must do one thing in order to see the cup come home; steal a game in Boston. The Blues must win a game in Boston or this thing goes the way of Bean Town. The Bruins are a very good hockey club that also earned the right to be here and they will not be an easy opponent. They play tough defense and they play great offense when necessary. Having said all of that, we still think St. Louis can win this series and yes, we think they can claim one in Boston. There are many types of bets to win money on in this series, be sure to dial up your sportsbook and get connected with the right options for you.

The Blues have Ryan O’Reilly who can hang with Brad Marchand. It won’t be easy, in fact, it’s going to be James Harden hanging with Steph Curry. Now before you jump the gun and say “Harden can hang with anybody and he can hang with Curry” take a step back and reexamine this. Has he really? How many NBA championships has Harden played in? Exactly… This series will be like Harden hanging with Curry, it’s going to be very difficult but if anybody can do it, it’s O’Reilly. O’Reilly is a great prop bet in this series so be sure to find a bookie that has a great track record for payouts and fantastic lines.

Vladimir Tarasenko’s numbers—33 G, 12 PPG, 275 S—David Pastrnak’s numbers 38 G, 17, PPG, 235 S. This is how close the numbers break down and they break down just like this from top to bottom across the board. Boston may have a slightly better defense than St. Louis but this team can score, they can play defense themselves and they will be a force.

Obviously, the best thing they can do is go into Boston and win game one. That’s a tough task and it most likely won’t happen. However, if this were to happen then this series could be over very quickly and we could be looking at five games, maybe six. This series is more likely to go seven games with Boston taking the first two at home, but do not be surprised to see the Blues take game two. Sports bettors are leaning towards a seven-game series and of course, the bookies are leaning towards the Bruins winning in six or seven. We think that St. Louis has the mustard to win a game in Boston.

The Blues come into this series nearly as hot as the Bruins having won three straight and five of their last eight games. The Blues are no stranger to winning, they are blue collar, they are hard-working, and they play smash mouth hockey that bloodies noses. They are not afraid to get their hands dirty and they won’t back down to Goliath. One thing we know beyond any doubt; they have no fear. This team was all but dead, nobody gave them any real chance to win and here they are. They did what they had to do in the playoffs and now they have a chance to bring one home for the fans in St. louis. They can do it, don’t let the online gambling sites fool you. This team is just as good as Boston and they will be difficult to bring down.

The Blues finished third in the Western conference Central Division behind Nashville, and Winnipeg. They went 24-15-2 at home, and 21-13-7 on the road. They are battle tested and have proven they can win on the road, not only have they proven it in the regular season, but as well in the playoffs. Forget about the team stats, they means nothing in a series such as this. What matters is who hits who harder. The Blues have scored 247 goals and allowed 223, that’s eight more than what the Bruins have allowed. Get the win in Boston, (which they will, either in game two or game five), and this series is theirs to lose. The Blues have the players, they have the confidence and they just might shock the online gambling world.