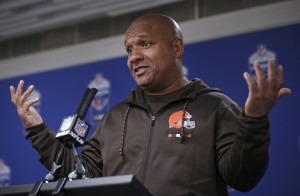 The following is the listing of 1st Round NFL Draft Order for Spring 2018:

1) Cleveland Browns and Hue Jackson- You are on the clock.

21 through 32 will be selected according to playoff seeding.  Record & Strength of Schedule will be used as tiebreakers. Thanks to all loyal followers & subscribers who believe in my systems as we continue a surreal run like our World Championship Season!
<p>