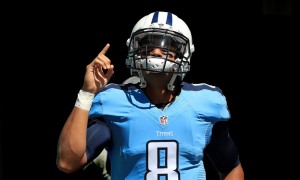 In this day and age of the often outlandish expectations of the QB, it is getting to the point of ridiculous. When Derek Carr, in his 3rd season, was throwing insane games, for 4 TDs and 513 YDs, Jameis Winston having two 4000 YD passing seasons already, expectations for where a young QB ought to be, have become pretty lofty at times.
Mariota has had his share of troubles this 2017 season. With just a measly 8 TD passes, he has had a legit problem putting passing points on the board, as well as having an interception issue with getting the ball to his guys, it has been tough. Losing his WRs for several games this season, due to injuries, haven’t helped the 24 year old QB, or the Titans.
Mariota has still more than shown he can make the plays when he has the occasion to do so. There are even at times, in his early career, he has become almost a more complementary piece in his game. He has to step up and show the fans and naysayers as to exactly why he was drafted at the 2nd overall spot in the 1st round and why so many glowed about him as one of the next great things the Titans team has in its mind going forward.
Marcus has a sly ability to typically minimize turnovers and a shifty way to escape sacks after protection has fallen aside, especially during his last season, in 2016. Things are still evolving for him, and he is taking it all in stride, the old saying “slow and steady wins the race” is playing out for Mariota. He didn’t come in with the flash that a David Carr or even Carson Wentz did, he just keeps putting together solid numbers and taking care of his games.
The Titans had tailored their offense around a 29 year old DeMarco Murray RB, who has had his shares of inconsistency – and future RB in Derrick Henry. It seems that Mariota is there to offer more of a support in the teams system. Yet, he has more than shown to be very effective with 62% completion rate and a very good career 7.6 YPA.
I feel better watching Mariota drop back to pass than I’ve felt about other of the young QBs in recent years, as he often turns bad situations into very controllable ones. To ask “where are all of the big 300 YD passing games, or where are the big game winning drives” that we all need to see from a QB, is not fair. He is the kind of QB that will not necessarily be that guy – with the insane stat line, but more of the moderate line, with key plays having been made at the right time. This 2017 season, with an overhauled identity – with all the lights on, and new young talented weapons to throw to, this was the season to watch things really come together. But, Corey Davis has missed 5 games, and losing 500+ YD WR Tajae Sharpe to injury has certainly hindered the team some in the aerial attack department.
Mariota is the kind of QB that is going to get even better and better with age and experience. He has shown so much already to fans who have watched him play, with 53 TDs and throwing 29 picks in 36 career games.  In a very short time from now, many will laugh at the notion that some people were unsure of him – and his leadership ability to carry a team on his shoulders. There is a QB in Tennessee, now, where fans aren’t nervously waiting for the other shoe to drop.
Written by Mike Anthony for 10StarPicks.