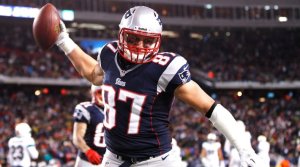 Week 11 is almost in the books, with the Atlanta Falcons traveling up to Seattle to finish out the week on Monday Night Football tonight against the Seahawks. A few top storylines that came out of his week have to include Bills coach Sean McDermott’s decision to bench QB Tyrod Taylor in favor of rookie Nathan Peterman.

Even though the Bills would have had a Wild Card spot if the playoffs started this past weekend, for some reason McDermott saw fit to bench the dual threat QB. How did Peterman fair in his debut and the football bettors backing his Bills? He threw five first half interceptions, including a pick-six on his first NFL drive. Before the first half was over, the Chargers had a 37-7 lead, forcing McDermott to put Taylor back behind center to start the second half.

The Chargers opened a 4.5-point home favorite but were bet up in Vegas and online sportsbooks alike to close giving 7.5. The Chargers win was one of nine favorites that took the straight up win on Sunday. Two underdogs got a W, including a stunning 12-9 New York Giant win over the Kansas City Chiefs and a convincing 20-17 Bengal win at Mile High against the lackluster Broncos.

Two other games closed at PK, where the Buccaneers opened as a 3-point dog to beat the Dolphins 30-20, while the Vikings opened as a 1-point favorite, taking the 24-7 victory over the Rams.

We had seven favored teams cover the spread, while three didn’t, with the Lions – Bears game ending in a push, as the Lions were 27-24 victors as a 3-point favorite. The two others were the aforementioned games that closed at a PK.

Do you prefer to bet the total? Well I have that info for you too. It was a very close race this week, with six games going OVER and 7 going UNDER the closing totals at most sports betting sites. A closer look at second half totals show the exact same picture, with 6 games going OVER and seven hitting on the UNDER, including a total of 28 points scored in the second half of three games (Chiefs/Giants, Ravens/Packers and Jaguars/Browns).

A look atop the NFL standings with Week 11 near completion show the Philadelphia Eagles with the league’s best record at 9-1, followed closely in the NFC by the Minnesota Vikings and the New Orleans Saints at 8-2, with the Los Angeles Rams and Carolina Panthers at 7-3. The Vikings would be the second seed over the Saints by winning the tiebreak based on head-to-head win percentage.

The AFC standings see the Pittsburgh Steelers and New England Patriots leading the pack at 8-2, with the upstart Jacksonville Jaguars alone at 7-3, followed by the Kansas City Chiefs and Tennessee Titans at 6-4. The Baltimore Ravens and Buffalo Bills round out the true playoff contenders at 5-5, although the Ravens would be in based on the best win percentage in conference games. The Steelers would be the AFC’s top seed over the Patriots because they win the tiebreak based on best win percentage in conference games.

As you can see, there was no clear-cut trend this week after looking at the NFL bookmakers against the numbers. There was however plenty meat left on the bone to pad your sportsbetting account. Be sure to come back next week for another look at the numbers.