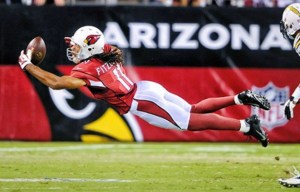 Some of the Cardinals QBs that Fitzgerald has had have not always been top ended guys. Consider some of the highly respected weapons in the NFL currently imagine putting 14-15 TD producer Jordy Nelson and 1400 YD receiver, Julio Jones on the field with 54% completion passer Derek Anderson and see what you would get. A disaster. Or to make things even more interesting, put the beast of beasts, Megatron, out there with a guy like Max Hall. Hall, who by the way, has thrown 1 TD in his 6 career games in the NFL.

How would intense players guys like Dez or Odell Beckham Jr. do with a career 63.0 passer rating QB in John Skelton? The comparisons continue to pile on an alarming rate or just how good Larry has been in his amazing almost decade and a half Cardinals career. Let’s really see how they all act when the going gets tough. When they are having a 1 catch game, or a 2 target game, where the Oline is getting mauled, or the QB just cant seem to get the ball out fast enough to keep them involved in the offense. He’s dealt with catching terribly placed balls on the one of the all time worst offenses in the history of the NFL. Then getting stuck with not 1, but 2 hamstring issues and then learning a brand new offense.

Fitzgerald has carried along a massive 104 TDs, a career 14,389 YDs, and 1125 receptions over 14 years playing for the Cardinals. A perennial 5-6 win team, who had only made the playoffs just 4 random times in his many years in the league. Fitz is at the tops on the Arizona Cardinals list of WRs, in the big 3 categories. And he is by far, and easily the best player they have ever had in that organization. Could you actually imagine Fitz with a Tom Brady, Brees or Aaron Rodgers? It would have been a nightmare thought and an entire months planning for teams to deal with every week.

He has been flipped around playing new positions as a slot receiver, with a brand new quarterback more than a multitude of times. Now the Cardinals have a serious powerhouse running game in David Johnson – something that Fitz has never had prior to the last years, he will be seeing even a little more space on the field.

Fitzgerald is still putting up very good numbers, 1,023 YDs in 2016 and still seeing 150 targets. He just isn’t putting up the massive numbers and taking over on the field every single week. The games that he used to take over, like 150 YD games, and multiple 2+ TD games during the season, are over.
And that’s ok.

A poor OLine at times, in Arizona, certainly affected Carson Palmer’s play, when he wasn’t getting the huge amounts of time to make plays, and then their was J.J. Nelson getting the receptions and looks that Fitz was used to getting before. And now with big play WR Michael Floyd gone from the team – having landed in Minnesota – I fully believe he will have a bounce-back year, in 2017. Passing 1200 yards and maybe even scrapping out 10 TDs, is very possible. He could leave people wondering how they could have possibly questioned how effective he still is.

There have been some other legendary guys who have put up very good seasons well after when most would have thought they were done. Reggie Wayne had 1355 YDs in 2012, Jerry Rice with 9 TDs and 1139 YDs in 2001 rolling along at 39 years old.

Larry Fitzgerald has never relied on amazing 4.2 speed to gain separation for his yards. He has always used great route running, smart body positioning and outstanding and elite ball skills. Fitzgerald should be able to rely on those great abilities to remain a top ended receiver for a few more years. Larry Fitzgerald is a true pro’s pro, he always has been. He obviously has all the tools to have the throwback 2011 season again – he’s incredibly intelligent on the field. Fitz will be back – keep an eye out.

Mike by Mike Anthony for 10StarPicks.