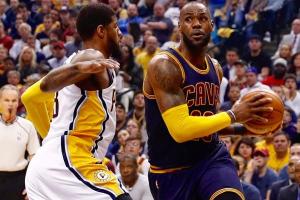 I’m banking on the Capitals to return to form (including Holtby) when they return to home ice in D.C.. They’ve weathered the storm in getting back home ice advantage & won’t be denied again. Alex Ovechkin will find a way to become a factor. Let’s go to the Verizon Center to play the WASHINGTON CAPITALS as my 8 Star Friday Lone Wolf Play!

If anyone witnessed the first 2 games, then you’ve noticed the Pacers being well-conditioned toward the end of the game. They won’t go away here as well. The Cavaliers got it done @ the charity stripe & from the field on their home hardwoods. The change of venue WILL affect this outcome tremendously. Cleveland’s BIG 3 (James, Irving & Love) are a load to deal with. However, HC Nate McMillan and his Pacers should have a better shooting percentage & could pull this one out in the end. Let’s go to Bankers Life Fieldhouse to take the ABA’s lone survivor, the INDIANA PACERS (buying to +6 @ around -185) as my 9 Star Look What We Found Play!

I feel this is the game where we’ll see a see-saw battle to the end. Look for more seasoned & experienced Pens to get it done versus these newcomers to the post-season. Go to the Consol Energy Center to play the PITTSBURGH PENGUINS as my 9 Star Closeout Special!

It looks like San Jose has turned it around in dominating fashion to deadlock this series, right? Wrong? The Oilers will be inspired hockey & get the job done with home ice advantage. They’ve dominating the west & I don’t see another flat spot as in game 4. Let’s go to up to Alberta’s Rogers Place to play the home ice EDMONTON OILERS as my 9 Star Public Missed Perception Play!

The Capitals are my pick to make it to the Stanley Cup Finals. This is the pivotal that Washington’s goal-tender (Holtby) shows his worth as the best in the business. Washington played excellent on the road & I feel it continues here. Don’t be fooled & take the WASHINGTON CAPITALS as my 9 Star Even Stevens Play!

I believe that consistent doses of John Wall & Bradley Beal will be too much for the Hawks to handle on the road. The Wiz’ even gave the Cav’s fits throughout the season. These 2 look like they’re moving in opposite directions. Washington can do some damage in the Eastern Conference. Let’s stomp to the Verizon Center in D.C. & play the WASHINGTON WIZARDS as my 9 Star NBA Motivator!

The Boston Celtics are a very talented ball club. However, i believe their chemistry has been disrupted a little this week & the Bulls sense it. Chicago can hang with this team & stay competitive if given double-digits. That’s exactly where we’re going to go here. Let’s take the CHICAGO BULLS (buying to +11 @ -188 or so) as my 9 Star Line Value Reigns Supreme Play!

I like what I’ve seen from Pittsburgh’s front lines mixing with excellent goal-tending. Columbus in a do-or-die situation may make them as tight as a drum. Let’s fly with the PITTSBURGH PENGUINS as my 9 Star Headliner Moneyliner!
NOTES: It’s no secret that I like an Edmonton-Washington final in the NHL. However, they’ll both endure growing pains getting there. The Wizards will also advance to the next round & should be able to make some noise in the Eastern Conference of the NBA. We finished our weekday plays on a 7-1 run since Tuesday & we’re also on a 6-0 streak since Wednesday. Forget what you’ve heard elsewhere — BUYING POINTS MATTER! This was clearly indicated when we bought to +6 on the Pacers Thursday night. After a few weeks of studying & gauging MLB teams, we’ll be releasing our 1st MLB selection on Saturday.
NHL 2016-17 Overall Record: 25-19—-57%—-
NBA 2016-17 Overall Record: 7-1——88%—-
We never force plays so some days will be a pass. Mike does what it takes to take all edges away from lines-makers. Playing every game @ where WE want the line to be is key. Those who complain about this approach are clearly an average joe whose confidence is lacking. Mike’s put this system to the test year after year & comes out on top for the majority. The average bettor does not. Climb aboard to put Mike to the test & you’ll see the difference.
Above records are accurate through Friday, April 21st.