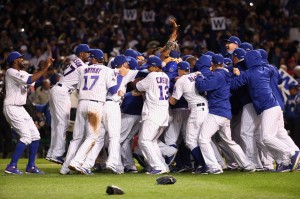 The 2016 World Series will go down as one of the best ever with the Cubs defeating the Indians in 7 games! With Baseball Season over lets look back and see how we did on my 2 prop plays. Detroit to win more than 82.5 games came home and won with 9 games still left to play. Texas to win more than 83 games was a cake walk and came in with 23 games left to play! Each season so-called ‘Baseball Experts’ try and predict how many games a team going to win, and who will win the Individuals awards. Of course every year they use Bill James & Sabermetrics is the way of the computer generation. Remember the movie ‘Money Ball’? It was about the success of the Oakland A’s under Billy Beane.

The movie portrayed that Baseball Scouts were being replaced with Computer geeks. However Oakland got beat in the play offs that season against the NY Yankees. Somebody should have told Jason Giambi about the sabermetrics chart where he should have slide in to home instead of running straight thur where Derek Jeter made his incredible back flip for the OUT! Hello Mac Fly it’s Baseball 101, of course he should have slide! I think Sabermetrics has a place in Baseball, but it will never replace good old fashion scouting and never will! To predict what’s about to happen in the future is still a ‘crap shot’. Everybody predicted another big year out of 2015 MVP Bryce Harper. In 2015 he batted .330 with 42 HR, 99 RBI, 649 SLG%, and 124 WALKS. In 2016 Harper batted .243, 24 HR, 86 RBI, .441 SLG% and 108 WALKS. The biggest thing however you can’t predict is ‘Injuries’ when it comes to making predictions! I’ll take my two future wins on the Tigers and Rangers, and come out swinging next season!

Written by RJ Robbins of 10StarPicks.com