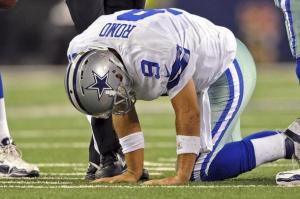 I started writing this during the start of the Dallas/Seattle NFLX game. I was going to write the Cowboys will be fine going with Dak Prescott as the #2 QB behind Tony Romo. Then the play that changed this article and the Cowboy’s season with Romo breaking a bone in his lower back. Is the Cowboy’s season over? Most experts think so. I don’t. Prescott a 4th round draft pick has had a good enough preseason for the Cowboys to name him the starter. Prescott has shown Russell Wilson ‘esk’ qualities. I am not saying he’s the next Russell Wilson, however he has shown his type of leadership and play!

The major thing that Prescott has going for him is the other 10 players around him. One of the best offensive lines in the league, plus weapons like of Dez Bryant, TE Jason Witton and 1st round pick RB Ezekiel Elliott who they hope lives up to all the hype! Dallas will build a game plan around Prescott that should take a lot of pressure off him. Time of possession will a important key for Dallas this season. The more they can keep the ball, the less their defense will be on the field, which is one of their biggest question marks!

My 2 cents… The word on Romo is he will be out six to 10 weeks. I think he will come back on October 30, against the Eagles the week after the Cowboys bye week. If that happens it will be eight weeks since the injury. Let’s see how this plays out. One thing is for sure, you are going to be hearing about this a thousands times thanks to the media!