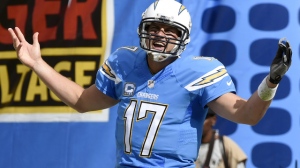 In this world where peoples expectations always seem to get higher and expected much quicker, sometimes unfairly so, there also comes a time when one has to ask is it that time? Mike McCoy has said enough about turning the Chargers franchise around, and thus far has struggled to improve this franchise. According to information out there, he has seemingly fallen out of favor with the fan base, for a team that is desperate for a winning season. With a record of 21-23 from 2013-present, it is understandable how the frustration mounts.
It gets to the point, as to how long are fans supposed to be patient?
But do the Chargers want to start on a streak of firing their coaches? Do they want no stability, and keep up with teams like the Raiders and Browns, in the firing regime? No one does. The Chargers have a gun slinger, in Philip Rivers, maybe they should consider using his skill set even more frequently, instead of running the ball with Melvin Gordon, and his struggling 3.5 ypc/game.
As far as Rivers goes as a QB, he is a great QB with a huge arm, and an attitude to match. He is extremely confident and even more competitive, which says a lot. The Chargers fan base has to keep their fingers crossed, this is one of those guys that retires a Charger.
He wants to be great, which is extremely important. The wanting. And his six 4000+ yd passing seasons and five 28+ TD seasons have shown he has more than the numbers to show what he can do.
Mike McCoy has always had a strong focus on offense, but the defense has been unacceptable, the Chargers have been less than impressive on that side of ball this year, giving up 28 a game, and ranking 31st in the NFL in pts allowed. After ranking 11th and 13th respectively in 2013 and 2014. There comes a time, when a Coach has got to put up some wins, or the job is in danger.
Melvin Ingram has been a lackluster leader of the defense. He doesn’t have that nasty attitude. A guy who plays mean, not dirty, but angry. A mean defense is always welcomed onto any team. The defense seems to have issues no matter scheme they seem to come up with. Defenses don’t want nice guys. Although his off the field issues were a concern, players like Steve Foley, was the kind of guy that gave the Chargers an edge.
Ingram is a decent player, don’t get me wrong. He gets his sacks here and there, and he gets accolades for his play. But, realistically, his play on the field, doesn’t change the tempo of the game. He doesn’t get the team to another level, when making a play. When coming up with a big sack, he doesn’t build fire under his teammates. Junior Seau and Leslie O’Neal did that when they played, they need a firestorm on defense to get them picked up. Teams playing the Chargers are not really concerned and they definitely aren’t afraid of their defensive front.
Teams have not struggled moving the ball on the ground. Picking up 126 yds/game. Especially moving the ball right up the middle.
When they got blown out by “game manager” QB, Alex Smith, it scares fans. The Chiefs are a team that is really nothing but mediocre team at best. It could be bordering disgraceful. Alex Smith was excellent in that game, throwing for 253, a high end 10.12 yds/attempt and another 33 yds on the ground.
Mike McCoy needs to toughen the team up. It seems at times, he is almost afraid to call anyone out for playing poorly. They have the standard, week by week mentality. And at 3-9 they might want to catch themselves some urgency, in getting more aggressive. I do not see Mike McCoy sticking around for very long if this continues.
McCoy comes off as a good guy. He arrived wanting to build a winning team on the cornerstones they already had in place. Chargers lost 3 games within 4 points and made the playoffs in 2013. It starts to makes fans question that move, without a doubt.
Perfect examples of teams that have shown the right, strong moves, have been the Bengals and the Vikings. They have raised the bar of expectations of their teams, and are legit teams, that match up well vs their opponents. The Chargers, at this point, are not even close. This team seems like, week in and week out they are just not ready to play.
McCoy needs to pull it together, because it is falling apart at the seams. He has now coached 44 games as their coach, and won 21 of them. It needs to get adjusted, or he will be hitching a ride out of town. The team has some talent, with standout WR Keenan Allen, and traveling WR Steve Johnson, so it cannot be entirely blamed on that. I think it is more of a lack of discipline.
No one can predict the future, yet. So the Chargers will have to wait to see what happens at this point with Mike McCoy and his squad on the field, and see how this all will turn out.

Written by TonyK of 10StarPicks.com