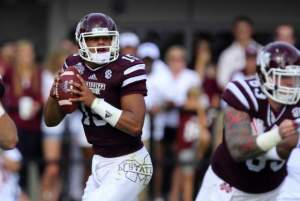 The Bulldogs are coming off their best season under HC Dan Mullen and I don’t expect them to get near the 10 wins they had last season. Mississippi State only returns 9 starters this season. They only return 2 on the O-Line and 1 on the D-Line. They lose Josh Robinson to the NFL draft and I expect Dak Prescott to struggle as he will not have as much surrounding talent or time in the pocket behind a young offensive line. The Bulldogs must replace their center, tackle, and guard. They lost all three of their centers to graduation and I can see this being a major problem. Early in the season, look for the O-line to struggle. I have to expect a lack of protection, penalties, and possibly some bad snaps.

On defense, State loses Preston Smith (9 sacks/ 15 TFL) to the NFL and also lose their MLB, Bernard Mc Kinney, who was basically their ‘quarterback on defense. The Bulldogs look to replace him with a redshirt freshman. I also want to note that the Bulldogs allowed the most passing yards in the SEC last season. While some of this can be accounted for with the big leads they had in games and their opponents were passing a lot late in games trying to play catch up. But I also think that this secondary just lacks talent. This season, they lose 3 starters in the secondary including both safeties. In 2015, the secondary is going to be young and inexperienced and again, I look for this defense to struggle.

The Bulldogs bring in DC Manny Diaz who I will note was part of some of the worst defenses in Texas history when he was the DC down there. Diaz did a good job last year with La. Tech, but taking a step back up to the SEC with a lot of new faces will not be easy.

Mississippi State opens the season on the road @ Southern Miss where they will be overpriced vs. a Southern Miss team that returns 9 starters on offense and will be looking to get revenge from last season’s 49-0 loss. State will have B2B SEC road games early in the season @ Auburn and @ Texas A&M. Both Auburn and Texas A&M will both be looking for revenge and I think they get it. Looking at last season’s games, Auburn lost 38-23 but they only got outgained by 28 yards. Auburn still rushed for 232 yards and playing at home this year, I look for the Tigers to win by double digits. Texas AM lost 48-31 last season, but they only got outgained by 33 yards. A&M actually had more first downs in the game, rushed for 5.2 yards a carry, and moved the ball well. It was the Aggies defense that was terrible but this season, A&M returns all 4 starters on the D-Line and I expect them to slow down the rushing attack and have an advantage over the inexperienced Mississippi State O-Line. On November 21st, the Bulldogs have to play @ Arkansas, a week after battling with Alabama. This will be an extremely tough game for the Bulldogs and one where I can see the Razorbacks winning by double digits. Arkansas will have the best O-Line in the SEC and maybe the nation and an improved defense also, especially in the secondary.

In closing, I have spotted 3 SEC games that I will look to fade the Mississippi State Bulldogs:
1) @ Auburn
2) @ Texas A&M
3) @ Arkansas